A BOOK FOR STAMPS album (and sometimes folder) with cardboard pages-doors having transparent or translucent strips, which are placed stamps and other philatelic materials. Between the pages are the protective sheets translucent paper. The book is not intended for storage of the collection in this store novelties, doublets, accumulate material before to arrange the collection in the album. Quality requirements: no deformation of leaves, heavy tension bands on both sides of the sheet.

A CIRCLE of YOUNG PHILATELISTS (KYUF) — the primary organization of the youth section of WOF. Clubs and KYUF are created on the territorial-production principle in schools, colleges, and Palaces (and Houses) of pioneers and schoolchildren, as well as various cultural and educational institutions (Palaces and Houses of culture, clubs, libraries and other), and the like. KYUF bring together schoolchildren, students of various educational institutions and working adolescents up to 16 years.

COLLECTION of study — the form of a collection built on philatelic materials and pursuing a specific educational goal, for example, to illustrate the development of printing, to show the types of mail to reflect the history of postal services and the like. Collection training can be illustrative material for the study of school some of the history, geography, science and others.

A COLLECTION of MOTIVIC — kind philatelic collection is arranged in chronological order and includes postage edition of one country, group of countries or the whole world, in the contents (the picture, the text, about the issue) reflected a certain theme or motif (for example, the image of the state coat of arms "stamp on stamp", flora, fauna, space exploration, chess and the like). In the collection of motivic mail publications are for the countries, and their releases, the series, and so on. Sometimes the motif of the Collection, and includes some of the target collection. A collection of motivic — the initial form of many thematic collections.

The COLLECTION is SPECIALIZED — kind philatelic collection are built according to special principles and covering a relatively small portion of any field of stamp collecting with a limited number of postal publications (e.g., individual issues of postage stamps, short periods of post-treatment, etc.). Specialized in the collection of these e-mail publications are treated in detail and comprehensively: selected all possible options and combinations, varieties, special cases of the post application, and other similar materials. A collection of specialized often is the initial form of many research collections.

The SPECIALIZED DIRECTORY — view filatelistov catalogue mail publications, arranged in chronological order covering certain issues in one country, at least of a group of countries. Contains detailed philatelic magazine characteristics, and includes in addition to the basic editions of all known varieties, as well as various additional information associated with their manufacture and post-treatment. Sometimes Directories close to specialized philatelic monographs. Specialized directories designed primarily for experienced collectors.

BIG BLOCK FAIR is a charity unit that was released in Western Saxony in 1946. Repeats the souvenir sheet issued in honor of the 1st post-war Leipzig spring fair in 1946, but in a larger size (147X209 mm). Has print special postmark. Sold in a cover with a commemorative text, initially only the participants of the fair, and then everyone.

SIGN ARTIST — special notes on sign postageindicating the name of the artist — author's drawing. 3нак of the artist — the name of hudozhnika (full or abbreviated) on the sign of postal payment under the picture, symbol, conditional or hidden sign in the form of small parts of the picture — there is on postage stamps and blocks of Czechoslovakia, Poland and other countries.

A SPECIAL ISSUE is the collective name for various email publications (postage stamps and blocks, postal stationery, postal stamps , etc.), released into circulation in connection with anniversaries, events and special purposes. In a special Issue, usually placed the appropriate text. Cm. The release of a commemorative.

ABD-EL-KURI[Abd-al-Kuri] is a small island in the Arabian sea between the Somali Peninsula and the island of Socotra, part of southern Yemen. The population of the island amount to about three hundred people living in three villages. In reality, Abd-El-Kuri belonged to South Yemen and Socotra, in addition, was the home for two years before an exiled South Yemeni dynasty who ruled the Sultanate of Mahra. At the end of 1969, the philatelic market appeared three stamps with images of aircraft "Boeing", "Tu" and "Concord" and the name of the island, released anonymous philatelic Agency, although at that time on the island was not even a post office. It was later revealed that they released in Rome by the firm "inter Philatelic" and the relationship to the island do not have. The authors were brothers Salinari posing them for non-existent issues of the Emirate on the Persian Gulf with a population of 250 thousand people. One of the "brands" even shows a map of the Emirate. Names are speculative fiction releases, and no philatelic value are not present.

ABU DHABI[Abu Dhabi] — Arab Principality on the coast of the Persian Gulf. With 02.12.1971 in the United Arab Emirates (UAE). The postal service was organized in 1963. Was originally used stamps for the British post offices in Eastern Arabia, who in March 1964 replaced by own. After entry into the UAE on stamps of Abu Dhabi were made overprint (English). "UAE" used only on the territory of Abu Dhabi. From April 1973 are in circulation brands in the UAE. 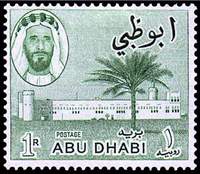 "ADAMS & co."company, carrying mail between Boston and new York. Founded in 1840. In 1854 issued its own stamps with denominations of 25 cents, of the different figures of the company Brand at 25 and 50 cents are also printed on the envelope domestic mail in 1853. Famous brands cutting 50 cents from envelopes, used as stamps.

ADDITIONAL CIRCULATION the issue of postage stamps by the administration runs beyond the original edition, when the printing has been completed. Systematically carried out with the exhaustion of the standard brands most running denominations, sometimes to prevent speculation in stamps. Additional circulation is resorted to in order to meet the demand of philatelists for some stamps still in circulation, but which stocks have been exhausted. Additional circulation often has some differences (the up zubtsovku, shades of color, paper) from the main circulation. 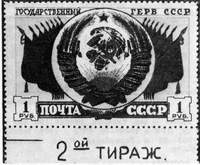 ADDITIONAL POSTAL SERVICES. In sootvetstviya with Postal regulations these include: writing addresses on mail, filling out forms notification of receipt and accompanying documents, packaging of parcels and packages, and the like. In different countries the list may be different.

ADDITIONALLY REPAID — the inscription on the special postage stampsused for damping postagewrongly remaining repaid when you receive mail. Use in some countries (e.g. in Austria) postal agencies in the areas of mail delivery. In the USSR such postage stamps instead of a stamp quenched with ink or colored pencil (Phillips).

ADDRESS(FR. — direction) — text to mail specifying where it should be directed and to whom awarded (the recipient Address), and where and by whom it was sent (the sender Address). The Address should also include postal communication enterprises. Cm. also the Mailing address.

ADDRESS ACCOMPANYING— mail form-the form of the established sample to specify the addresses of the sender and recipient of certain categories of postal items (parcels etc.). Unlike the address sheets not glued, but attached to a forwarded mail item. In some countries, for example in the Soviet Union before 1929 to Address a cover pasted postage stamps to pay for forwarding postage. Address with accompanying printed or pasted on them by the signs of postal payment,as well as having notes of different postage stamps and stamps, recognized objects philatelic collectibles.