BACHAI SAKAO PROVISORY— during an anti-government uprising bachai Sakao in 1929 in Afghanistan on stamps of Afghanistan 1927, 1928 hand-made overprint (in Pashto) round stamp. Napechatana postage stamps 8 values, 1 office and 1 mail order.

BAD GOTTLEUBA PROVISORY[Bad Gottleuba, the Soviet zone of occupation in Germany, in the GDR]. In June 1945 on stamps of Germany, overprint made the city seal with the coat of arms and the inscription (it.) "The Bad Gottleuba".

BAD NAUHEIM PROVISORY[Bad Nauheim, the Soviet zone of occupation in Germany, in the GDR]. In December 1945 — March 1946 it produced its own brand with the name of the city and the word (ger.) "Post office". Later was placed the image of the city emblem. On the stamps was the signature of a postal employee. 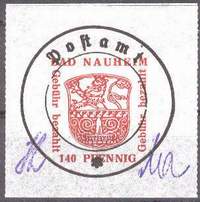 BAD SAAROW PROVISORY[BadSaarow, the Soviet zone of occupation in Germany, in the GDR]. In July 1945 on stamps of Germany, overprint made (it.) the name of the city. Later issued stamps with two concentric circles, between which the inscription (it.) "Post office", and in the center of the city's name and the figure of value.

BADEN[Baden] — the Grand Duchy in Germany. From 1871 a part of Germany. In 1945, after the defeat of Nazi Germany, the territory of Baden was included in the French zone of occupation. The first stamps depicting the figures of denomination — issued in 1851. In 1860 — 68 on stamps — coat of arms. In experiment 2 stamps of the values issued 1860 with glue red. In 1862 issued postage due stamps. From 1872 used stamps of Germany, 1945 — stamps for the French zone of occupation in Germany, and from 1947 began to produce private labeled (it.) "Baden" (standard, commemorative, postal-charity stamps and blocks). From 03.10. to 31.12.1949 stamps of Baden were used throughout Germany, and commemorative stamps before the end of March 1950. From September 1949 in the treatment of DM.

"BAEZA"— the name of the Spanish postal round stamp with a diameter of 28 mm — on behalf of the head of the Spanish mail Juan Baez, who introduced him 15.12.1841. Used in all post offices of Spain and its colonies in 1842-1858. On the stamp the name of the city, province, postal district and date. In January — February 1850 stamp quenched the first stamps of Spain.

"BAGEL"["Bagel"] — printing firm in Dusseldorf (Germany), print stamps for the Anglo-American zone of occupation in Germany and the FRG. Known for its abuses: many of the stamps appeared without teeth or with missing perforation, as well as recycled prints issued for rarity.

BAGHDAD RELEASE(the Ottoman Empire, now Iraq). In 1917, after the occupation of the city by Anglo-Indian forces entered into circulation stamps of the Ottoman Empire Guinea-Bissau (English). "Baghdad under British occupation" and new denomination in the Indian currency. Napechatana and stationery (2 envelopes). 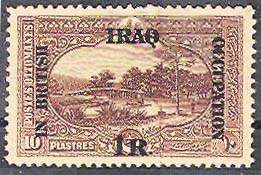 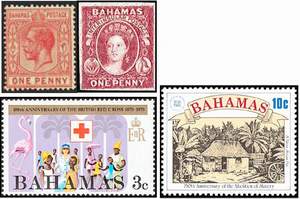 Postage stamps Bahamas.
At the top, a colony of Britain. Downstairs — self-government (1964) and independence.

BAHAWALPUR[Bahawalpur] — the former feudal Principality in British India, in 1947 became part of Pakistan. First stamps — overprint Crescent with a star and an inscription in Urdu on the stamps of British Indiawere used in the August — December 1947. In 1948-49 released brand original drawings, 1945-49 — owned brand. A memorial service brand marked the victory of the allies in the 2nd world war. The stamp features the flags of the victorious countries, including the USSR. All the stamps of Bahawalpur withdrawn from circulation in 1949 and replaced by stamps of Pakistan.

BAHRAIN[Bahrein] — a former British protectorate on the same archipelago in the Persian Gulf. After independence 14.08.1971 Bahrain is a constitutional monarchy. The first post office opened in 1884. Used stamps of British India. In 1933 issued its own stamps — overprint (English). "Bahrain" on stamps of British India. In 1948-60 used stamps of great Britain overprinted with the same name and the new value. The first series of stamps with original drawings released in 1960, 1966 — the first commemorative stamps 1976 — first unit. In 1973, used postal tax stamp.
The local edition of the Bahrain — stamps with the portrait of the Sheik, released in 1953-56 mail Bahrain, which were subordinated to the British postal Agency (in 1957 — with additional values). In 1961, a series of stamps was reprinted with the values in the new currency. Intended only for domestic shipments, however, their use for international mail 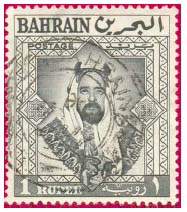 BAILLY MAIL[Baja, now Salvador, Brazil]. In 1866 in the city of Bahia was opened by the British post office, who worked until 1874 and using the postage stamps of great Britain and the stamp index With 81. 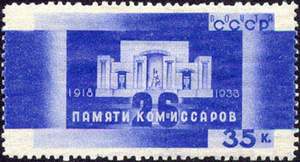 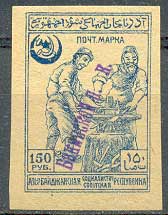 BAKU PROVISORY— local postage stamps 1922, the revaluation of plying stamps — hand stamp of "P. K. Baku", "Baku G. P. T. O No. 1" (2 types), "Accepted", "Baku", "Baku. 927", "Itinerant official", "Chief of Baku railroad. — Dor. mail. branch of the" black or purple paint, who performed the role of stamps revaluation and the inscription from the hands of a new denomination in red ink on the stamps of Azerbaijan Soviet socialist Republic, is dated 1921, 1922 various values.