DAHOMEY [Dahomey] is a former French colony in West Africa. Independence proclaimed 01.08.1960. To 30.11.1975 — the Republic of Dahomey, then — people's Republic of Benin. The first colonial mail stamps issued in 1899, a post-charity stamp — in 1915, the commemorative stamps — in 1931, the first in 1937 an airmail stamps in 1940. In 1944-60 years in circulation were stamps of French West Africa. Postage due stamps were issued in 1906-43 years. The Declaration of independence marked by the issuance of a commemorative stamp. In April 1976 entered into circulation stamps with new name of the country. 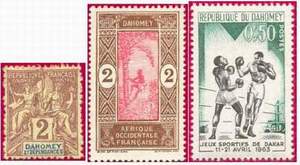 DAMPING is the collective name of various methods of applying certain marks on postage stamps for cancellation, to prevent their re-use to pay for the shipment of mail or other postal services. To Extinction are: contamination pattern of stamps, ink, pencil, paint and the like; applying all sorts of imprints of stamps or stamps (see the Stamping); different mechanical damage to the paper of the postage stamps (cut, tear, puncture, etc.). Under the Damping often refers to the application of stamp marks on postage.

DAMPING NOT STAIN PORTRAIT — canceling postage stamps with the portrait, when the imprint stamp, which settled brand, does not stain the portrait. Considered particularly for some brands of the 19th century (see the Stamp framework). Such damping specified by the Postal rules of the Union. 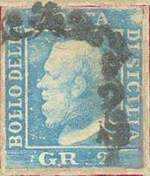 Damping of the non-mail — the collective name of various forms and methods of cancellation of the postage stamps and templetonia mail, not related to email. SAP non-mail include Telegraph, telephone or tax cancellation, and various stamps and non-postal stamps of origin, the use of which is not of a postal nature. Damping non-mail belong to the objects of philatelic collectibles only when considering the different ways of cancelling the stamps in the research collections.

The EXTINCTION of INK — a special form of cancellation of postage stamps by crossing pen or labeling by hand. Produced in many countries (including in Russia) in the mid 19th century in addition to the stamps blanking or instead of them. Currently, damping of the ink is performed, if the sorting of postal items or their delivery detected signs of postage outstanding postal stamps.

The EXTINCTION of the MANUSCRIPT — a special form of cancellation of postage stamps with pencil or ink. When Extinguishing the manuscript in addition to strikethrough for signs of postal payment may specify the place or date of use, name or initials of a postal employee, his personal signature and more. Damping of the manuscript was widely disseminated in the mid-19th century in addition to the cancellation stamps, or instead of.

Damping of the MASS — see the Stamping in the leaves.

The MECHANICAL DAMPING , see damping of the machine.

Damping of the PEN (STROKE) — a special form of quenching postage — crossing pen. Produced in many countries (including Russia) in the mid 19th century in addition to the cancellation stamps, or instead of. Currently, when in the process of sorting postal items or with the results found signs of postage outstanding postal stamps with their delivery in the mail, is the extinction of the feather.

Damping of the PRINTING is the collective name of various forms and methods of cancellation of the postage stamps and templetonia mail, made in the typographical way. With the Cancellation of printing is usually performed principal pre-cancellation, and in the last time and stamping the sheets of stamps. SAP printing includes blanking newspaper printing.

CANCELLATION of SAVINGS — cancellation savings and postage stamps (used savings); produced special stamps and also signed by the cashier. Objects of philatelic collectibles is not.

Damping of the TELEGRAPH — the collective name of various forms of telegraphic cancellation of special Telegraph stamps, handwriting, official seals and other. Damping of the Telegraph indicates that the mark was used as a fee upon receipt of the telegram. Stamps with Cancellation Telegraph not formally belong to the objects of philatelic collectibles, as are not postage stamps, but are often included in specialized collections of research character.

PROVISORY DANILOV (Yaroslavl province) — local issue of 1920, the revaluation of plying brands in the ratio 1:100,— manual overprint purple paint of the letter "R" on stamps of Russia in 1; 2; 3; 4; 10; 15 and 20 kopecks., as well as savings on the marches of pre-revolutionary Russia 1 kopecks.

The DANISH WEST INDIA [Dansk Vestindien] — colonial possession of Denmark in the virgin Islands (St. Thomas, Santa Cruz and others). In 1917, the Islands of Denmark sold the USA. Own stamps were issued in 1856-1915 years. 1917 in circulation are brand USA. On the island of St. Thomas in 1860-77 worked for the British post office used stamp with index 51.

DANZIG (Gdansk) [Danzig, Gdansk]. In 1919 Danzig, formerly part of Germany, was declared a Free city, in September 1939 invaded by Nazi Germany. After the 2nd world war, Danzig became part of Poland and was renamed Gdansk. In June, 1920, issued its own stamps — overprint (German) "Danzig" on stamps of Germany, with Sept. 1920 issued an airmail stamps, 1921 — official and postage-due stamps, postal-a charity and commemorative stamp. The first units were issued in 1937. In September 1939, stamps of Danzig seized. Since 1945, the appeal of the brand Poland.

DATE of ISSUE — date of issue of the postal edition (postage stamps, postal stationery , and others) on sale at the post office. As a rule, in recent years coincides with the first day of admission to the post-treatment. Sometimes these dates are different. For example, the first Russian postage stamp went on sale in mid-December, 1857, and in the post-treatment with 01.01.1858 year.

DATIA [Duttia, between datia] — the former feudal Principality in British India, with its own postal service. The stamps were issued in the years 1893-1920. The inscription on the stamps (English) "the State Date". All brands of Datii before the release was supplied with a print of the control stamp on bychno blue. Withdrawn from circulation in 1921. Replaced by stamps of British India.

Postage stamp of the Principality Datia