GABON [Gabon], the Gabonese Republic is a country in Central Africa. The former French colony, which was part of Francucci Equatorial Africa. 1958 — Autonomous Republic. Independence proclaimed 17.08.1960. The first stamps issued in 1886. In 1910 entered into circulation stamps with original drawings and the inscription (in French) "the French Congo. Gabon", changed in January 1911 on "Equatorial Africa. Gabon". In the years 1915-17 were produced postal charity stamps, 1931 — a memorial. 1936 used stamps of French Equatorial Africa. The first stamps of the Republic were issued in 1959 to mark the anniversary of its creation, in 1961, the first standard released stamps, postal airmail — 1960, the first unit took place in 1962, the first mark on a gold foil — 1965. Service stamps were issued from 1968 postage due — 1928. For the Olympic games in Moscow released a series of 2 stamps and 2 block.

GALES is the Polish name of Geller.

GALICIA, the ISSUE is a regional issue stamps, 1919 Polish troops occupied regions of Galicia, formerly part of Austria. On the picture Polish heraldic eagle and the face value in Austrian currency.

GALVANISE — the title of the printed forms, a cliche, obtained by the electrolytic method when copying the original printed form. With the help of Galvanise mounted printing form to print sheets of postage stamps. Cm. Galvanotherapy.

GALVANOTHERAPY — electrolytic method of making stereotype plates. Widely used in printing industry to obtain the matrices postage. From the original printing plate (sample) is manufactured of soft material matrix, which is coated with the electrolytic method, a thin layer of solid metal and fill in with solid ground. Galvanotherapy can transfer the fine features of the original printed forms.

GAMBIA [Gambia], the Republic of the Gambia — country in West Africa. A former British colony. Independence proclaimed 18.02.1965. 1970 — Republic. The first brand of the colonial type in the Gambia issued in 1869, the first commemorative stamps — 1935. Independence marked the release of commemorative stamps and overprinted on stamps standard series colonial period (English) "Independence, 1965". The first unit was released in 1976, the stamps in the booklets (self-adhesive) — 1979.

GASOLINE Used by philatelists to determine a watermark, to identify the "repaired" stamps with nastavlenie teeth, fields and the like. Use only the best grades of clean Gasoline. With it, brands are derived from some grease stains. Sometimes long-term treatment of Gasoline could dissolve partially glued stamps. The glue and paint most brands of Gasoline has no harmful effect, fast volatilizing. To businesstalk grades of Gasoline can not be used. If you are working caution is necessary.

GAVE — a bargaining chip in Indian. the Principality of Dhar, equal to 1/4 Anna.

GAVRILOVO PROVISORY (Semirechie region) — local issue of 1920, the revaluation of plying brands in the ratio 1:100,— hand overprint in black ink the letter "R" on the postage stamps of Russia at 15, and 5 kopecks.

General Directorate of POSTS AND TELEGRAPHS (GUPT) — in Russia 1884 year, the state body in charge of the organization and activities mail. Within the Ministry of internal Affairs after the merger into a single Department of postal and Telegraph services. Emblem GUPT — 2 post horn (the post) and two zippers (the Telegraph) — reproduced on the postage stamps of Russia since 1884. By 1912 run GUPT were 46 territorial offices, 12 departments the carriage of mail by rail, 2 posts-Directorate (post office) in St. Petersburg and Moscow, 29 post and Telegraph districts, 2 urban and 1 Telegraph Telegraph district (in Finland). Offices post and Telegraph districts subordinate to the mail or mail and Telegraph office at the provincial, district and other cities, and they in turn mail or postal Telegraph offices in the territory of the city or County. After the February revolution, 05.05.1917, GUPT transformed into the Ministry of posts and telegraphs.

GENERAL post office — a name of up to 20-ies of the 18th century wore post offices in Moscow and St. Petersburg. From 1725 the so-called just Petersburg post office.

GENEVA [Geneve] Canton in Switzerland. In 1843-48 ogdah issued its own stamps. First grade dual could be used fully (within the Canton) and cut in half (for local mails). The rest — the usual. Withdrawn from circulation 30.04.1854.

GENEVA DUAL — philatelic stamps the name of the Swiss Canton of Geneva in 1843, which is a double stamp with a General inscription at the top. 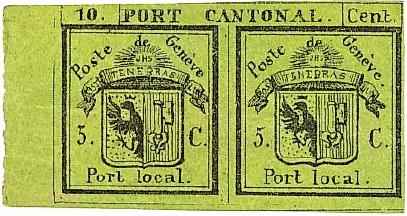 GEORGIAN SOVIET SOCIALIST REPUBLIC. 25.02.1921 proclaimed after the establishment of Soviet power. From 1922 to 1936 was part of the TSFSR. The first own brand of the GSPC issued in February 1922. This is a brand with original drawings and inscriptions in the Georgian language. In April, 1922, published by the postal-charity stamps in favor of starving. The issue of stamps was continued until September, 1923. In September, 1923, entered into circulation stamps of Transcaucasian socialist Federative Soviet Republic, and 01.02.1924 — stamps of the USSR. 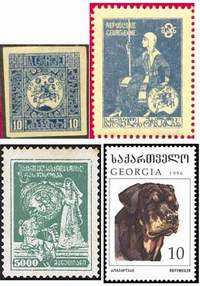 GERMAN EAST AFRICA [Deutsch-Ostafrika] — German colony in East Africa until the start of the 1st world war, which included the territory of modern Burundi, Rwanda, a large part of Tanzania (Tanganyika). The Treaty of Versailles of 1919 Tanganyika went to Britain, Rwanda's, Urundi to Belgium, district of Kiong — to the Portuguese colony of Mozambique. Mail began working in 1890. Used stamps of Germany. In 1893 began production of its own brands — first overprint value in your local currency on stamps of Germany, and in 1896 the name of the colony. In 1901 entered into circulation stamps of the colonial type (on drawings yacht "Hohenzollern"), in the years 1905-11 replaced stamps with denominations in other currencies.

GERMAN NEW GUINEA [Deutsch-Neu-Guinea] — the former German colony in the North-Eastern part of the island of New Guinea, on archipelago Bismarck and Northern Solomon Islands. Occupied by Australian forces in 1914. In 1920 under the name of New Guinea — mandated territory of Australia. Mail opened in 1888. With 1897 produced his own brand — name overprint on stamps of the colony to Use the rights defined in the documents of the quality management system. /Dictionary/Info/85. In 1901 -14 years in circulation were the stamps of the colonial type (figure — yacht "Hohenzollern").

GERMANY [Deutsches Reich] is a country in Central Europe that existed until the end of the 2nd world war. Unleashed the 2nd world war Germany, which in 1933 came to power, the Nazis, led by Hitler, was defeated by the anti-Hitler coalition with the decisive participation of the USSR. The territory of Germany was divided into Soviet, American, British and French zones of occupation. Later in Germany was established in 2 German States — GDR and Germany, as well as an independent political unit of West Berlin. United postal service in Germany was created in 1871, and a single postage stamps were issued 01.01.1872. They sign (German) "German Imperial mail" from 1889 — the "Imperial mail" in 1902 — "German Empire". The first commemorative stamp issued in 1919, the first in 1930, the first postal airmail stamps in 1919. In the years 1928-33 issued special stamps for shipments transported on the airship. Service stamps released in 1874-1944 years, telegraphic — in the years 1872-75. In the years 1945-49 in circulation were stamps postal administrations of the occupation zones of the allies, of the Control Council for Germany. 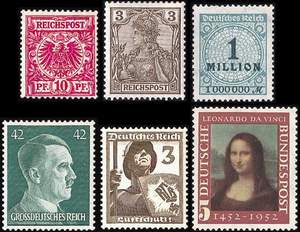 German post in Ottoman Empire. In Constantinople in 1870, and later in Smyrna, Beirut, Jaffa, Jerusalem was opened by the German post office. Ispolzovalis stamps North German postal district, and in 1872 brands in Germany. In 1874 in circulation were stamps of Germany overprinted with new face value in Turkish currency. The release marks continued until 1908. In September 1914 all German post offices in the Ottoman Empire were closed.

Brand Control Council in Germany. After the surrender of Nazi Germany established in 1945 a joint body of the USSR, USA, Britain and France — the Control Council in Germany for the exercise of Supreme authority in Germany during its occupation. The decision of the Control Council in Germany in January 1946 began to issue stamps with the inscription (German) "German mail" for use in all occupation zones, but in the French zone they were not allowed into circulation. Released 2 series standard brands, known as "the I and II editions of the Supervisory Board", and five memorable editions. In Dec 1946 released the block devoted to the philatelic exhibition in Berlin. Brand of the Control Council for Germany withdrawn from circulation in 1948 in connection with a separate currency reform in the Western zones, carried out by the Western powers that have engaged in a course for the division of Germany.

Editions of English and American zones of occupation. In 1945, British and American occupation zones of Germany entered into circulation stamps with the inscription (German) "Allied military post. Germany." Series published in USA (9 values), England (6 values). In July, the series reissued and substantially expanded in Germany. Stamps withdrawn 07.11.1946 year and replaced by stamps of the Supervisory Board. After a separate currency reform in the Western zones 21.06.1948 year marks the Control Board napechatana — postal horn (2 types) and used to 19.09.1948 year. In August 1948, entered into circulation commemorative stamps original drawings with the inscription (German) "German mail", and in September 1948 — the brand new standard series. 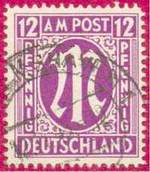 Editions of the Soviet zone of occupation. In June 1948 the American, British and French occupation zones of Germany was carried out a separate monetary reform and impaired the flow of money and brands flooded into the Soviet zone. 24.06.1948 monetary reform. Prior to the release of new brands each post office instructed to napechatat all stocks of previous editions of numbered stamps for postal orders. Brands napechatat used 0.1 value. In July 1948, entered into circulation stamps with overprint (German) "Soviet occupation zone". From August 1948 began to issue stamps original drawings with the inscription (German) "German mail". In 1949, released block. Stamps withdrawn from circulation at the end of 1951. 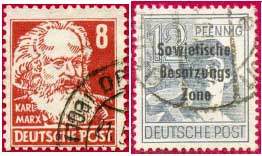 Editions of the French zone of occupation. Until December 1945, and in some places until 1948, the payment in cash. In December 1945, entered into circulation stamps with the inscription (in French) "French zone", was used to 20.06.1948. From 1947 to Baden, the Rhineland, the Palatinate, württemberg and the Saar region were issued their own stamps, which were used until 1950.