HAITI [Haiti Republique d], Republic of Haiti — a country in the Caribbean sea, on the Western part of Haiti and the adjacent Islands. To 1677 — Spanish, then French colony. 1804 — independent state. In 1915-34 years occupied by the United States. The first stamps of the Republic issued in 1881. On them a symbolic image of Liberty. The first commemorative issue came into circulation in 1904. Produced stamps for domestic and international mail, an airmail stamp (1929), blocks (1942). Mail Haiti has issued service, parcel, postage due and postal tax stamps.

HALL-SAMODE K° [ "Zala Somogyi C°"] — a steamship company operating ferry services on lake Balaton (Hungary) in the 70-ies of the 19th century. For the travel correspondence in the years 1875-76 issued stamps without denominations with image of an anchor and the abbreviated name of the company. Famous brand green, red and blue colors.

HAMBURG [Hamburg] — with 1510 Free Hanseatic city in Germany. In Hamburg he worked the post office of several States. The first stamps issued in 1859. Drawing — figures of the face value on the background of the coat of arms remained almost unchanged until 1867. Withdrawn from circulation and replaced by stamps of the North German postal district 01.01.1868.

To HAND IN OWN HAND — see Hand personally.

HANDMADE PAPER is a collective name for various grades of paper made by hand. Handmade paper has a noticeable fibration and roughness, different thickness, even within the same sheet. For printing postage stamps, handmade Paper of ispolzovalis mainly in the 19th century, for example, the first stamps of Austria 1850, the Netherlands 1852-64.

HANOVER [Hannover] — in the middle ages the Duchy, then a Kingdom in Germany, since 1866 a province of Prussia. The first stamp issued in 1850 with the coat of arms and numeral of value. The issue continued until 1864. In 1866 a new brand, but in the letter. With 01.10.1866 entered into circulation stamps of Prussia, but the use of stamps of Hanover was allowed to 31.10.1866. Possible mixed of tranceroute.

HAPAG [HAPAG] — steamship society in Germany, carrying out postal services between Germany, the West Indies and Venezuela. In 1875-79 produced its own brand (2 edition).

HARMFUL EMISSIONS — the collective name of the post publications of the various countries (primarily postage stamps and blocks), the recognised FIP harmful to philately. Harmful emissions prohibited to exhibit in the philatelic exhibitions under the patronage and with the participation of the FIP. HLF appealed to collectors to boycott such publications, not to collect and put them in their collections. Set the criteria that define Harmful emissions, they are periodically reviewed. To Harmful emissions are speculative publications specifically for distribution among collectors, is not received in normal mail handling due to low mintage or special conditions of sale, selling at a price significantly in excess of the nominal price (markup 50 %), as well as various options, the appearance of which is not called mail need (publishing simultaneously perforated and bezzubova brands). 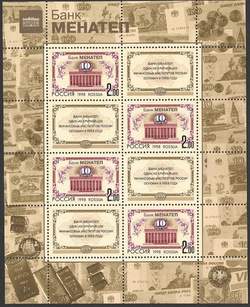 Small sheet dedicated to the 10th anniversary of Menatep Bank. With a circulation of 35,000

HARRISON AND SONS — the name of the English printing company, printing houses which printed postage stamps of great Britain and other countries.

HAWAII [Hawaii] — the former Kingdom on the archipelago in the Pacific ocean, 1893 — the Republic of 1899 in the United States. The first stamps issued in the Islands in 1851. They sign (English) "Hawaii post". In 1893, stamps of previous issues is reprinted with overprint (English) "Provisional government 1893", and in 1894-99 the years produced brand original drawings. In 1859 was published the brand only for domestic postage, 1899 — series for international shipments. With 14.06.1900 in the treatment of brand USA. 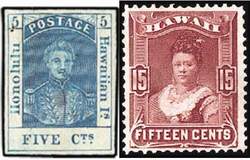 HEADSETS POSTAGE STAMPS — complete set of all possible variants of stamps of the same issue: clean, hydrated, on the FDCs, maximum cards the. If the releases of the brand without teeth, blocks, coupling, tet-Bashi, stationery and others — they too must be included in the set of stamps, and coupling and one-Besi desirable to include in various combinations (combinations).

HELIGOLAND [Helgoland, Heligoland] is an island in the North sea. Since 1814 a British colony. Part of Germany in 1890 (now Germany). Since 1796, the island was worked for the Hamburg post office. In 1866 created a private postal service, which produced the brand in the years 1867-79. Since 1875 the denominations on the stamps of Heligoland were disclosed in English and German currency. Stamps of Helgoland removed in 1890 and replaced by the stamps of Germany. 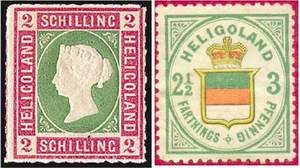 HELMETS — the name of philatelic stamps of Belgium 1919-20 years with the image of king in a helmet. 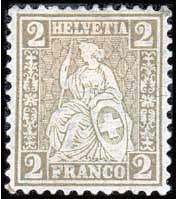 The HERALD — a special person sent to deliver the message, to. The first mention of the sending of the Bulletin in Russia at 885. With this date begins the history of Russian mail. The system of Messengers that preceded the establishment of regular postal communication. Cm. Messenger.

GAZETTE COMMUNICATIONS is a monthly industrial and technical journal of MS of the USSR and the Central trade Union for communications workers. Leaves in Moscow from 1940.

GERM [Herm] — island in the group of channel Islands, East Guernsey, consisting of Guernsey County (UK). In 1946-69 the years, the island produced private labels to pay for transport of mail from the island of Guernsey and back. Withdrawn in 1969, after the establishment of official postal services in Guernsey.

HERMAN, Emanuel (1839-1902), Professor of political economy (Austria). 26.01.1869 suggested to prevent post-treatment at a reduced rate postal card, original named post telegram, with text of no more than 20 words. 01.11.1869 these marked cards, named correspondent, first in the world released in Austria.