ICA PROVISORY [Yea, Peru, South America]. The ICA issued its own stamps in April and may 1884. On stamps of Peru made overprint (Spanish) the name of the city. Also known overprints on stamps of Chile. Since 1885 used stamps of Peru.

ICELAND [Island], the Republic of Iceland (since 1944) is a country on the island of Iceland in the Atlantic ocean. Until 1920, the possession of Denmark, 1920-43 the years who were in Union with Denmark Kingdom. Own stamps were issued in 1873 the first postal airmail in 1928, the first memorial in 1930, the first in 1937. Icelandic mail is also publishing service stamps including service memorabilia.

IFNI [Ifni] — former Spanish colony in Saveware-West Africa. In 1969, the territory of Ifni included into Morocco. Produced its own stamps since 1941. Had previously used the stamps of Spanish Sahara, and in the years 1949-51 stamps from Spanish West Africa. The first commemorative stamps issued in 1949 an airmail in 1950. The release of the postal-charity stamps began in 1950. Since 1969, the appeal of the brand Morocco.

"YAHSI PROVISORY"— philatelic issue name 1895 in Bavaria in connection with a reduction in postal rates — overprint of the new nominal value of "2" at extra charge stamp 3 Pfennig (1888). The use of these stamps was forbidden, and mark in the letter. However, in the city of Aichach, this brand is still used. 6 known instances of slaked.

IKARIA [IKAPIAΣ] is a Greek island in the Aegean sea. Until 1912 the Ottoman Empire. In 1912 it declared itself an independent state. In October, 1912, entered into circulation stamps depicting coins of the 3rd century BC with the inscription (in Greek) "the Free state of Ikaria". In November, 1912 Ikaria busy Greek troops. Made overprint on stamps (Greek) "Greek administration". Since February, 1913, in the circulation postage stamps of Greece.

ILYINSKY CHURCHYARD PROVISORY (Olonets province) — local issue of 1920, the revaluation of plying brands in the ratio 1:100 — inscription by hand in black ink with a new nominal value "5 p" the postage stamp Russia in 5коп.

IMATEST — defect stamps (block and others) arising from careless handling during production, counting, packing, transportation and storage. Differs from the fracture with no damage to the integrity of the glue and fiber structure of the paper. Depending on the magnitude of Crumpled reduced the value of the brand. Sometimes Imatest resolved (see Mark's postquality).

IMPRIMATURA — the stamp inscriptions of a technical nature (usually outside of the picture) — the names of artist, engraver, title, typography, year and more.

IMPRINT — run printing printing machine in the manufacture of postage stamps for zapechatyvanie in ready-made picture additional text or design. Not to be confused with Guinea-Bissau. Imprint has been widely used recently in the production of new special editions of stamps and blocks on the old copyright to the original but with additional text or images (for example, a souvenir sheet of 1984 USSR with additional text "V Congress of all-Union society of philatelists. Moscow 1984", standard mark Germany 1923 stamped with a denomination).

INDEXATION of telecommunications — awarded to companies communication of digital indexes, in which sorted mail.

INDIA [India], Republic of India (since 1950) — gosudarstvovo in South Asia. Independence was proclaimed in 1947. Until 1947 the colony of British India. The Declaration of independence marked the release of 3 commemorative stamps with inscriptions in English and Hindi. In 1948 issued the first postal airmail stamp. The proclamation of the Republic marked 26.01.1950 commemorative series. Indian post has dedicated stamps L. N. Tolstoy, M. Gorky, V. Havkin — Russian bacteriologist. The centenary of the birth of V. I. Lenin noted the issuance of a commemorative stamp. Special stamp dedicated to the joint flight of his and Indian cosmonauts. Released office and postal tax stamps, and stamps for Indian troops in the UN force. 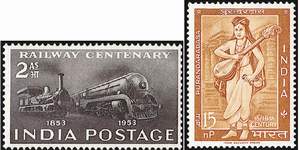 INDIAN CONVENTION STATES. In the 80-ies of the 19th century, the British government of India concluded with some of the feudal principalities that were part of the postal Convention, in accordance with which they were supplied mail stamps of British India. She determined the issue of stamps, postal rates and conditions for mail exchange. Stamps could be used for shipments within principalities, in other conventional of the Principality and in any place in India. With 01.04.1950 entered into circulation stamps of India, and its own brand Indian Convection States 01.01.1951 were seized.

INDIAN FEUDAL STATE — a number of former feudal principalities of British India, which had its own postal service and producing brands that are, with few exceptions, could only be used within the principalities. Most brands used a short time. All brands principalities withdrawn from circulation 01.05.1950, except stamps of Travancore-Cochin (mail was used to 01.07.1951 and service until September 1951).

INDONESIA [Indonesia] Republic of Indonesia is a country in Southeast Asia on the Islands of the Malay archipelago and the Western part of the island of New Guinea. A former colony of the Netherlands India. Independence proclaimed 17.08.1945. First stamps — stamps of Netherlands India Kenya (Indonesian) "Indonesia" released in the years 1945-48. In 1950 the name on the stamps (overprint) "Republic of the United States of Indonesia" or its abbreviation. The first commemorative stamps came out in 1950, units in 1961; postage due stamps — from 1950.

Foreign editions of Indonesian mail. During the Dutch blockade of the Republic of Indonesia in the years 1947-49 Indonesian mission abroad ordered postage stamps. In 1947 published a series of standard postal airmail and Express stamps with original drawings, which in 1948 reprinted. The failure of the Dutch blockade marked by commemorative stamps. In addition, released a number of commemorative stamps and blocks, as well as service and doplaty brands. After the end of the siege stamps in small quantities were issued in Indonesia. Mail is very rare.

INDORE [Indore] is a former feudal Principality in British India, with its own postal service. Until 1904 it was called government Holkar. Private stamps issued since 1886. Inscriptions in English and Devanagari. In 1908, the Principality has become a public post, and 01.03.1908 Indore stamps used only for official correspondence of the government of the Principality. The release marks continued until 1947. In the years 1904-06 issued service stamps.

ININI [Territoire de 1'Inini] — the territory South of French Guiana (South America). In January 1947, together with French Guiana became an overseas Department of France. In 1930 established an independent administration, which produced in the years 1932-39 own brand. Since 1947 used stamps of France.