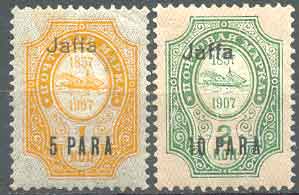 Stamps of the Russian mail in Jaffa

JAIPUR [Jaipur] former feudal Principality in British India. In March 1949 Jaipur became part of Rajasthan. Had its own postal service. The first stamp issued in 1904, a service — in 1928. The release marks continued until 1947 (service prior to 1949). Was and 2 commemorative edition. Since 1950, only used stamps of India. 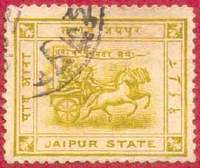 The Principality Of Jaipur

JALUIT PROVISORY [Jaluit island in the Marshall Islands, the former German colony]. In 1897-99 years on the island prepared the first issue of stamps — overprint (German) "Marshall Islands" on stamps of Germany. Then this issue replicated in Berlin.

JAMAICA [Jamaica] is an island in the West Indies, the former British colony. With 06.08.1962 — independent state. First stamp issued in 1860. On them the portrait of the Queen. In the years 1916-19 issued stamps war tax; the first postal charity stamps, in 1923, the first memorial in 1935. The Declaration of independence marked the release of commemorative stamps on a standard — made overprint (English) "Independence". In 1962 came the first unit, in 1890 and 1891 and service brands, 1855-71 the years as postage stamps fiscal used.

JAMMU [Jammu] — part of the Principality of Jammu and Kashmir in British India. Own brand of rectangular form with inscriptions of the Arab font was produced in the years 1867-77. In 1869, stamps of a single issue for the whole Principality (round shape) reissued with a change of colors for use in Jammu. Since 1878 has been used only brand of single releases. 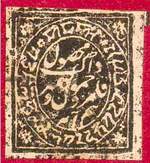 Mark of the Principality of Jammu

JAMMU AND KASHMIR [Jammu and Kashmir] — the former feudal Principality in British India in the Western Himalayas. Own stamps were issued in 1866-94 years for the whole of the Principality, and separately for the Jammu and Kashmir. The first stamps of a single issue was published in 1866 — the drawing of circular shape with inscriptions only in Arabic script. In Kashmir the stamps were extinguished by a stamp of red colour. Since 1878 issued a postage and service stamps rectangular shape. The issue terminated in 1894, and a post office Principality eliminated. With 01.11.1894 used stamps of British India.

Mark of the Principality of Jammu and Kashmir

JAPAN [Nippon] — country in East Asia. The first postage stamps of Japan (the dragon) came out in 1871. All labels in Japanese. In 1872— 1947, almost all stamps were placed heraldic chrysanthemum. The first commemorative stamp issued in 1894, an airmail in 1919, the first in 1934. Japanese mail in the years 1910-24 issued stamps exemption from collection of mail for the military. Since 1966 on all makes Japan the country name is also given in Latin letters.

Japanese post in China — consular post, established in different cities of China in 1900. In circulation were stamps Japan with overprint "China" on 2 characters. All Japanese post offices in China were closed and the brand withdrawn from circulation 31.12.1922. 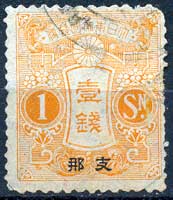 Japanese post in Korea — consular post in Korea, established in 1900. Used stamps, Japan 1899, 1900 with overprint "Korea" 2 characters and stamps Japanese mail in China. In April of 1901 all stamps were withdrawn from circulation and replaced by the stamps of Japan.

Editions of the Australian occupation forces in Japan. In 1946 field post offices of Australian forces in Japan were prepared and put into circulation a series of 3 stamps Australia, 1942, 1943 with a reduced overprint (English) "the Occupying forces of the British Commonwealth. Japan 1946", but after 2 days it was removed. In may 1947, the brand once again came into circulation, and at the same time the series was supplemented with 4 stamps of denominations. Finally withdrawn 28.03.1949.

Japanese fake. The first stamps of Japan 1871-79 years are often forged. All fake brand, made in Japan, are in figure 2 miniature characters that are closed stamp. Characters meaning either "imitation" or "fake". This is because the fake stamps were punished in Japan death. The presence of characters has removed a charge of falsification.

JASDAN [Jasdan] — the former feudal Principality in British India Peninsula Kathiawar. In February 1948, Jasdan became part of the United state of Saurashtra India. The first and only brand with a symbolic image of the sun and inscriptions in Gujarati released in 1942. Mark has a number of varieties, as detectives until 1948. Then, in the treatment of brand India.

Mark of the Principality of Jasdan

JASSY FAKE — title philatelic fake stamps of the Principality of Moldova in 1858. Meet the letters postmarked mail in Iasi.

JERSEY [Jersey] is an island in the group of the channel Islands, the territory of great Britain. The postal service was created in 1794. Since 1840 used stamps of great Britain. In 1941, during the German occupation of the island issued stamps with the coat of arms of the island in 1943 — stamps with the image of the island. After release into circulation of the newly entered brands in the UK. Since 1958 were produced for regional brand, 01.10.1969 own brand. The 25th anniversary of the liberation ostorova marked with a commemorative series. One of the stamps — flags of the USSR, the UK and the USA. The first unit was released in 1975. Published booklets and stationery. 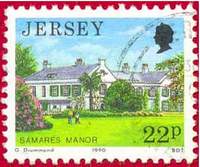 JERUSALEM RELEASES [Ierusalem, Palestine, until 1917 — the Ottoman Empire]. Before 1914 worked here Russian branch of mail use. stamps of Russian mail in the Ottoman Empire. In 1909, the issued stamps with overprint of the city's name in French language. The series consisted of 9 stamps of face values. In 1948, the French Consulate in Jerusalem organized its own postal service with France. To pay for shipping on the stamps of the consular fee and the Marche France 6 francs (1947) made overprint (French) text, "Jerusalem. French mail (airmail)" and a new value; used short time.

JHALAWAR [Jhalawar] — the former feudal Principality in British India, which produced its own brand in the years 1887-90. Labels, played only Devanagari (writing system like cuneiform) and Arabic font. Withdrawn from circulation 01.11. 1900. Replaced by stamps of British India. 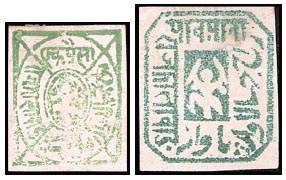 JIND [Jhind, Jeend, Jind] — the former feudal Principality in British India, with its own postal service. The first stamps issued in 1874. Production continued until 1885. In July 1885, the Principality signed a postal Convention with the Central post office, and in the years 1885-1945 used stamps of British India overprinted with the name of the principalities and words (English) "Service" for official stamps. Withdrawn from circulation 01.01.1951. Toconventional brand was used from 1885 as a fiscal.

JOHOR [Johore] — state of Malaysia (in 1957-63 years — Malaya), a former Sultanate a British protectorate. The postal service created in 1876, issued the first stamp — overprint of the star and Crescent on the stamp at 2 cents the Straits of Settlements. In the years 1884-91 used stamps of Straits of Settlements overprinted with the name of the Sultanate. Since 1891, were issued stamps with original drawings. The first commemorative stamps issued 1896 postage due stamps in 1938. In the years 1957-63 was used stamps Malaya, from November 1963 — stamps of Malaysia, as well as their own standard brand. 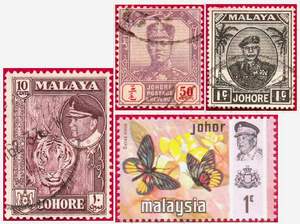 JORDAN [The Hashemite Kingdom of Jordan] — the Hashemite Kingdom of Jordan — gosudarstvovo in the middle East. Until 1918 part of the Ottoman Empire. In 1918 — 20 years — part of Syria. Since 1921, the Transjordan under British control. Independence was proclaimed in 1946. In 1949, renamed Jordan. Own stamps were issued in 1920 — overprints (Arabic) on stamps of Palestine and Higasa, 1927 — stamps with original drawings. The first commemorative stamp issued in 1923, the first postal airmail in 1950. Since 1949, the stamps, the name "Jordan" instead of "Transjordan". The first block came out in 1962. In 1965, Jordan has dedicated a series of stamps and blocks of Soviet cosmonauts. Published postage stamps — 1923 and post-tax in the years 1947-55.

JUBALAND [Oltre Giuba] — the territory South of the river Juba, in East Africa, now part of Somalia (SDR). Until 1925 was part of the British colony of Kenya, and in 1925 was transferred to Italy. The protectorate of Italian Jubaland lasted 1 year and in 1926 was included in the Italian Somalia. In 1925-26 years of issued stamps of Italy with overprint (Italian) "Beyond Juba" — postage, Express, postage, mail-order and stamps for of postal orders, commemorative and postal-a charity issue, as well as 2 series of commemorative stamps with original drawings. In 1926, entered into circulation stamps of Italian Somalia. 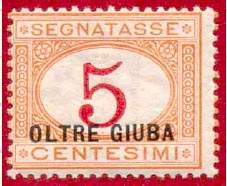 JURY — in philately group is the most knowledgeable and reputable individuals, selected for evaluation of exhibits for competitive philatelic exhibition, or the results of participants in various philatelic competitions and contests. The jury appointed by the organizing Committee of exhibitions or competitions. In the Soviet Union was created and deystvovala the Jury to evaluate the exhibits in philatelic exhibitions. In the USSR members of the Jury were assigned depending on their experience and qualifications philatelic certain category: international, all-Union, Republican, 1-I, 2-I.