SABERS DESPEC — private mail Sieber, organized in 1851, in Pittsburgh (Pennsylvania, USA). The release of their own brand of 1 cent.

SAFELYREMOVE — special pressing of paper ready stamps to protect them from tampering and reuse. Embedded in the paper colorless additives, forming dashes, bars, etc., contribute to a better penetration of the stamping ink into the paper, impede flushing of the stamp.

SAMMLER DIENST [Der Sammlerdienst] — the special magazine on all aspects of philately and numismatics (Essen, Germany). Published in German in 1949. Frequency — 26 issues per year.

SAMMLER EXPRESS [ "Sammler Express"] — a journal of the Central Board of the Union of philatelists in the Kulturbund (Germany). Published in German in 1947. Frequency 24 issues per year. Publishes the philatelic novelties all over the world, and special articles on philately and other fields of collecting (numismatics, philomenia).

SCORE — philatelic title coupling of 2 stamps, drawings of which are turned at 90° to one another. Score is a pretty rare mutual arrangement of the stamps in the sheet: only in the leaves of some Zemstvo stamps, in Soviet philately — in sheets stamps of the series "international competition named after P. I. Tchaikovsky in Moscow" in 1958 (in the center strip of the jackpot form 2 different brands). 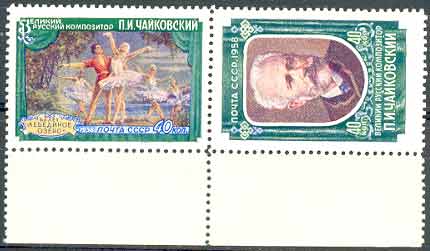 Postage stamps of the USSR, printed in the score

SEEBECK STAMPS — philatelic name brands Ecuador, Honduras, Nicaragua and El Salvador 1890-98 years, prepared by the Director of the American Columbia. Seabeam under contract with the governments of these countries. According to the Seebeck contracts supplied the post office postal service, zaplatili and Telegraph stamps, which were in circulation during the year. The remnants of the stamps and printed forms became the property Seebeck, allowing it to print out stamps for collectors in its sole discretion. Under pressure from the philatelic public contracts was not renewed.

SEEGER CATALOGS edition in German philatelic firm "German Sieger" (Germany), catalogs of German and Austrian airmail and specialized catalogue of shipments cepelinai maildeveloped carefully and in detail, the directory blocks of Europe and a number of thematic catalogs.

SENDER— the person or organization addressing (sending), the mailing, the sender.

SEPA CATALOG — was published from 1892 to 1944 in Leipzig by the firm of the brothers Louis and Richard Zenful catalogue of the postage stamps of all countries of the world. Before 1920 included the whole thing. For many years was the most popular in Europe. 3енфа directory is the precursor of the directory of lipsia.

Set-off(mirror print) – in philately, the image on the reverse side of the stamps. Usually occurs due to malfunction of printing machines: the print from the printing plate enters on the intermediate cylinder, and then during the working stroke of the reverse side of the sheet. Another reason ablach – the use of bold thick paint, which thoroughly impregnates the paper (usually sufficiently friable) and emerges at the reverse side. Recently in connection with the improvement of printing techniques brands of set-off is extremely rare. Considered varieties of stamps.

SIGN ENGRAVER — special notes on sign postageindicating the name of the engraver who took part in the work on the issue. 3нак engraver — engraver name (full or abbreviated) on the sign of postal payment under the picture, symbol, conditional or hidden sign in the form of small parts of the picture — there is on postage stamps and blocks of Czechoslovakia, Poland and other countries.

SIGN PRINTING is a special mark indicating the printing house where printed copies of the data postage. 3нак printing — full or abbreviated name of the printing house, a conventional symbol or brand name printing on the box under rowecom brand, or on the margins of stamp sheet. Symbol printing can also be in the text output. 3нак typography as an abbreviation for the "MGT" (Moscow printing house of Goznak) has the postage stamps of the USSR, 1969, "Russian tales in illustrations by I. Bilibin" (No. 3815-3819). 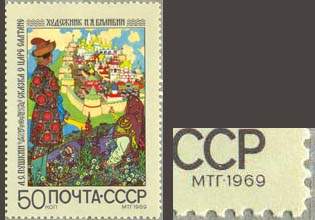 The abbreviation "MTG-1969" the postage stamp of the USSR

SIGN PROTECTIVE. In the 19th century undertaken various activities in the manufacture of postage stamps to protect them from tampering and counterfeiting. These include the use of special paper (see Paper Dickinson), chalk coatings, guilloche, typographical, secret signs and more.