CUTTING — philatelic title of the part cut from the shell, any postal shipment or shipment in a specially designed and contains repaid postage stamps, other stamps, as well as reprints of various postal or other stamps and dies. There are round, oval, rectangular or polygonal Tenderloin; Sirloin impressions of stamps must have required fields, and Clippings of stamps — the complete stamp stamps repaying. Clip your postage stamps printed on one piece of things, is not recommended (the whole things are placed in the collection completely), although earlier Clippings from postal stationery was considered full objects philatelic collectibles. Clippings recently widely used in philatelic exhibits, as they allow better use of the area of the exhibition stand. 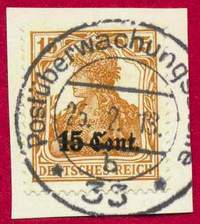 The ADDRESS LEAFis a sheet of paper with typed or written addresses of the sender and the receiver for sticking on the shell of mail (usually for parcel post or small packet). In some countries (e.g. in Austria from 1900) the Address of the established sample sheets were produced with the printed on them by the signs of postal payment.

GRANULAR GLUE — glue layer with inhomogeneous surface with darker blotches. The result of insufficient mixing of the components for the production of glue. The granular clay is found in some copies of many Soviet brands 50 years. Is not a defect.

"CROWN AGENCY" ("Agency of the crown for oversea governments and administrations") is a British Corporation engaged in the supply of British possessions and the States members of the Commonwealth, including stamps. Prepares and prints postage stamps, and also carries out wholesale sale. Leads reserved emission policy.

The ALAWITE REGION[Alaouites] — oblast in the West of Syria, inhabited by alawites. In 1923 was made a separate administrative unit within Syria. In 1930 renamed Latakia. In 1925, issued its own stamps — overprint "Alawites" in French and Arabic on stamps of France and Syria. Released mail, an airmail and postage due stamps. 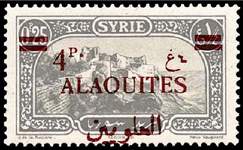 Postage stamp area of the Alawites

The all-UNION SOCIETY of PHILATELISTS (VOF) is a voluntary cultural and educational organization established in the Soviet Union in March 1966. The main objective of the Society is the efficient use of philately as a means of Communist education, the involvement of the broad masses of workers, especially young people, to socially useful activities through the collecting of postage stamps, combining a reasonable vacation with expanding cultural and educational horizons.
WAF operates on the basis of a single Charter, cooperates with the Union of philatelists of other countries. 1967 included in the International Federation of philately (FIP), takes part in international exhibitions and congresses of FIP. The primary organization offices, clubs philately — created at industrial enterprises and in agriculture, in schools and at cultural and educational institutions. As of January 1985 there were about 3500. The number of members — 200 thousand people. Junior section has over 210 thousand of pioneers, who are engaged in the 6000 KYUF. The focus of organizations of are constantly philatelic exhibition as the most effective means of promotion of philately and the activities of the society. In addition to exhibitions propaganda constantly by the media, through lectures among members of VOF and population. Themes philatelic exhibitions, publications, lectures and talks linked to important political and historical events, anniversaries. The main attention is paid to the promotion of philately by means of the ideas of Marxism-Leninism, the decisions of the party congresses and translate them into reality. One of their regular forms of media work are the club and the city collectors meeting, which held talks, lectures, discusses the problems of philately methods of development of individual collections or their fragments.
Monthly 1966, MS USSR and of publishes scientific and popular illustrated magazine "Philately of the USSR". In the annual publication "Soviet collector" publishes research articles on the subject collecting.

The AMA[ATO, now Sanmin] — city in China, one of the open ports. From March 1890 to April 1895 there used brand mail city of Shanghai. In 1895 issued their own brand of urban mail original drawings. Brand to Shanghai mail overprint (English). The "AMA" as well as original drawings with the words (English). The "AMA" — a speculative fiction nature. In 1842-1920 in Amoy also worked for the British post office. From 1866 used stamps of Hong Kong (Hong Kong), 1917 the Hong Kong stamps with overprint (English). "China."

THE ARMENIAN SOVIET SOCIALIST REPUBLIC. In November 1917 the power in Armenia was seized by the Dashnaks; Armenia was occupied by the English and Turkish troops. Soviet power was established in 1920. Of the Armenian SSR proclaimed 29.11.1920. With 12.03.1922 for 05.12.1936 was part of the TSFSR. The first stamps of the USSR were issued in 1921 overprints made the stars, the abbreviated name of the Republic (arm.) and new denominations on stamps of Russia, and also to issue stamps in 1920. The stamps are large in size (the ruble) in radicado were Russian abbreviation "CCPA". In 1922 released brand original drawings with inscriptions in Armenian language. The release marks continued until may 1923. With 15.09.1923 entered into circulation stamps of Transcaucasian socialist Federative Soviet Republic, and 01.02.1924 — stamps of the USSR.

Postage stamps of the Armenian SSR

The AUSTRIAN STATE PRINTING house IN VIENNAis one of the largest printers in the world printing postage stamps not only for Austria but also for many countries of Europe, Asia, America and Africa. Stamps are printed in gravure printing, metallographic and combined method.

THE AZERBAIJAN SOVIET SOCIALIST REPUBLIC. The Soviet government established in November 1917. From the summer of 1918 Turkish, English intervention, the power of the Musavat. 28.04.1920 proclaimed Azerbaijani Soviet socialist Republic. With 12.03.1922 for 05.12.1936 was part of the TSFSR. The first stamps of Azerbaijan SSR issued in April 1920, the brand's original drawings, without teeth, with inscriptions in French and Azerbaijani languages. Printed on gray paper (yellow glue or without glue). In October 1921 an appeal was received stamps postal-a charity issue to benefit famine victims, as well as the brand standard series original drawings with the inscription of "Azerbaijan socialist Soviet Republic" in Russian and Azerbaijani languages In 1922-23 was made to the revaluation marks. In 1923 entered into circulation stamps of Russia overprinted with the letters "T. S. F. S. R." in the circuit of the stars, intended for the whole of Transcaucasia, but was used only in the Azerbaijan SSR. With 15.09.1923 used stamps TSFSR, and 01.02.1924 stamps of the USSR. 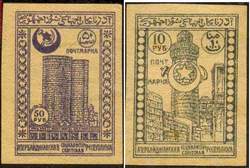 "The AZORES REMAKES"— the name of the remakes of stamps of the Azores performed 1868-82. Are deviations in the size of the perforation and no glue.

Postage stamps of the Azores Islands