WAADT — stamp the brand name of Switzerland, 1849-50 intended for postal use in the Geneva area and the Western part of the Canton of Vaud.

WADHWAN [Wadhwan] — the former feudal Principality in British India, on the Peninsula of Kathiawar. Had its own postal service. The first stamp issued in 1888, in 1892 reprinted on thicker paper. On this issue of stamps has ceased. Stamps withdrawn from circulation and replaced by stamps of British India 01.01.1895. 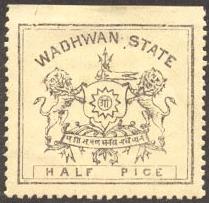 WARPING — deformation (folding) stamps and vintage postage sheetscaused by unequal absorption of moisture by the paper and adhesive. From old brands with a thick adhesive layer can even lead to tearing of the paper. Stamps washed off with glue or without glue released much less prone to Warping, as moisture will only accept paper. To prevent (reduce) Warpage is applied corrugation adhesive (see Adhesive corrugated).

GUARANTEE SIGN — a sign in the form of a small stamp, stamped philatelic firms and trade organizations on the turnover of the brand and should be indicative of its authenticity. In the USSR 30-50-ies were used, Warranty signs, more than 10 types (small ovals, horseshoes, circles with numbers, letters "f" or "GK", etc.). Guarantee sign can't guarantee the authenticity of rare stamps, which are usually subjected to skilled examination.

WARSAW CITY POST OFFICE. During the German occupation during the 1st world war in Warsaw, worked as a city mail. Produced its own brand in 1915-16. Withdrawn from circulation in 1916.

Mail acted with 23.09.1915 Issued its own stamps in 1915-16 (2 value of 5 and 10 pennies). Also known with individual printings protective mats have. On stamps, the acronym "K. O. M. W." (short for Polish. "Komitet Obywatelski Miasta Warszawy" — "the Civic Committee of the city of Warsaw"). The stamps were used for payment of mail delivery in Warsaw and within a radius of 50 km from the city. With 21.10.1915 the letters were also stamped "WRECZENIE OPLACONE" (Pol. "Carriage paid"). Known cases of the use of stamps cut in half.
Withdrawn from circulation 20.10.1916. Many varieties and counterfeits.
Was prepared the second edition of the 4 brands, but it is in the appeal were not included. In 1918, the stamps of this issue was made overprint "Poczta Polska" (Polish. "Polish mail") and the stamps were issued as nationwide. 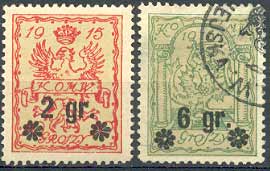 WARWICK EDITION [Warwiszki, Lithuania] — the local edition of 1923. On stamps of Poland made overprint (Pol.) "The Government Warwicke". Quenched round rubber stamp purple. A lot of counterfeits. 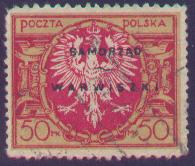 WASHINGTON-FRANKLIN (Washington-Franklins, also "the third edition of the Bureau" (Third Bureau Issue)) — philatelic title of standard postage stamps of the U.S. early XX century (1908-22) with images of George Washington (22.02.1732, Virginia — 14.12.1799, mount Vernon, Virginia, the first US President, 1789-97) and Benjamin Franklin. Produced regular and roller stamps, and booklets. Distinguished by a large number of varieties in options of the image, watermarks, methods of printing, perforation. Also known with private perforation

Water RESISTANCE — in philately, the property of paper, postage not to collapse under the action of water. Known cases used for printing postage special niedostatki grades of paper to protect them from reuse after washing off the old stamps. To the same end are different nevadastate paper coating, destroyed by water (the chalk grid, kolodeeva film , etc.). Stamps printed on paper newdetails require careful and delicate handling. Their washing in the water is unacceptable.

WATERMARK — a translucent (visible to the light) mark on the paper. Is a means of protecting the stamps against counterfeiting, was also used as a decorative element in art design or brand name enterprises manufacturing paper or printing postage stamps and blocks. In the manufacture of paper, a special roller with a pattern of the Watermark distributes paper pulp; density of dry paper in places, pressed with a roller, somewhat less so on paper there is a little thinner and slightly transparent. The first paper with a Watermark — factory sign manufacturer — appeared in Italy about 1282. Paper with a Watermark is widely used in the manufacture of postage stamps, particularly in the 19th century (the first stamps of great Britain 1840, 1858 Russia and others). On paper with a Watermark was printed many stamps of the USSR in 1921 — 37 and labeled envelopes from different sets. In a recent paper with a Watermark is used mainly for decoration. The postage stamps and blocks of the USSR 1982-85 series "masterpieces of the Hermitage" the paper has a Watermark with the letters "GE" (the State Hermitage).

ARTIFICIAL WATERMARK — watermark, obtained by pressure (compression) on the moistened paper, special matrices presses (unlike a conventional watermark applied to the paper during its manufacture). Artificial watermark is usually used as a reference sign of the factory — manufacturer of the paper or the printing, print data of the brand.

BOUNDARY WATERMARK — watermark, located only on the margins (edges) stamp sheet. In the area of the sheet occupied by marks, misses chance. Usually the Watermark boundary — mark of the factory — manufacturer of paper.

WATERMARK DECORATIVE — stamp the name of the watermark, which is an element of decorative art design postage stamps or block. For example, mails. block of the USSR in 1967 for the 50th anniversary of the great October socialist revolution (No. 3561) watermark is a memorable day "50 years" on the background of a Laurel branch — placed on the pitch block.

WATERMARK DOUBLE — stamp the name of the additional bulges or gaps of paper located next to the conventional watermark. Accident occurs due to uneven distribution of pulp in the manufacture of paper.

HORIZONTAL WATERMARK — a watermark with the direction of the drawing parallel to the top and bottom sides of the brand. Postage stamps with a different direction of the picture watermark, for example, by the attachment of a sheet of paper in a printing machine of the other party, are varieties.

WATERMARK INCORRECT — philatelic title watermark on the paper stamps with a different picture, and not officially assigned for this release. Cause of the Watermark is wrong occasional use when printing stamps another paper. Brand with a Watermark incorrect on the paper belong to the species.

WATERMARK INVERTED — stamp the name of the watermark, which is the direction of the figure is turned 180° relative to the adopted. Cause of the Watermark inverted is an incorrect feed of a sheet of paper with a watermark in the printing machine (the other side). Stamps printed on paper with Watermark inverted, are varieties.

WATERMARK COMMEMORATIVE — stamp the name of the watermark picture or text which is special, memorable character. Paper with a Watermark of commemorative prints only the commemorative issue

MULTIPLE WATERMARK — the watermark, the pattern of which is repeated on the sheet so that each sheet of stamps has at least 1 full pattern and several distinct elements of the neighboring parts. An example of a Watermark is multiple watermark "shadow squares" on Soviet postage stamps.

SIGNATURE WATERMARK — watermark, which is the trademark of the factory — manufacturer of the paper or the printing, print data of the brand. Usually the Watermark signature is on the margins (edges) stamp sheet.