Coats of arms of subjects and cities of the Russian Federation. Kaliningrad region

On April 7, a post block with an overprint dedicated to the 75th anniversary of the Kaliningrad Region went into circulation. 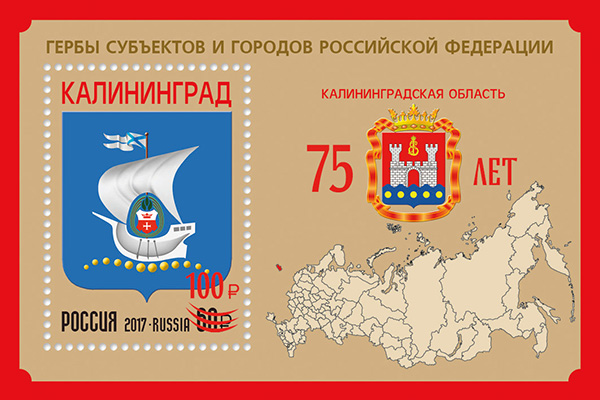 The 2017 postal block of the series "Coats of Arms of Cities and Subjects of the Russian Federation" is overprinted with a new nominal value and a commemorative text.

The coat of arms of the Kaliningrad Region was approved on June 8, 2006 and is a heraldic shield divided into two parts. In the upper scarlet field there is an image of a silver crenellated fortress wall with an open gate and two silver crenellated towers coming out of the wall. On the field of the shield between the towers is the monogram of the Empress Elizabeth Petrovna of the middle of the XVIII century. The lower undulating tip is azure in color, burdened with five golden circles. The coat of arms is crowned with an amber crown and framed with a ribbon of the Order of Lenin.

Added the inscription "75 years" and a new denomination of 100 rubles.