On August 18, a stamp dedicated to the 550th anniversary of Afanasy Nikitin's journey to India was put into postal circulation 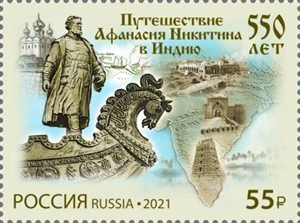 Afanasy Nikitin was a Russian traveler, writer, Tver merchant and the author of famous narrative known as The Journey Beyond Three Seas. He was one of the first Europeans who reached India (30 years earlier than Portuguese navigator Vasco da Gama). In 1468-1474 (dated by L.S. Semenov, earlier dating by I.I. Sreznevsky was 1466-1472), he made a journey across Persia, India and the territory of modern Turkey and wrote down his impressions known as The Journey Beyond Three Seas. Presumably, the merchant wanted to travel to Shamakhi with Ambassador Vasily Panin and Hasanbek, a Shamakhi Ambassador, who had visited Tver, to distribute Russian goods and establish economic relations with Asian merchants. Unfortunately, Nikitin failed to reach the destination, because his ships were attacked near Astrakhan. However, it was not the end of his misfortunes: near the town of Tarki (modern Makhachkala) they were caught by a storm, the ships were thrown ashore, and all the merchants were taken prisoners. With the help of Vasily Panin and the Shamakhi Ambassador, the captives were set free but deprived of their goods. Since the goods for the voyage had been borrowed, Nikitin was afraid to return empty-handed and continued his journey in search of a replacement for the stolen goods.

Afanasy Nikitin went on the Indian shore in the first days of June, 1471; most historians who investigated the traveler's notes of journey quote this date. After a long and not quite successful travel, the Tver merchant arrived at the Indian port of Chaul located 120 km to the south of contemporary Mumbai. The famous Russian historian N.M. Karamzin opened The Journey Beyond Three Seas in the Trinity List (late 15th or very early 16th century) and published excerpts from it in the notes to volume VI of History of the Russian State in 1818. Nikitin’s essay was the first Russian writing that described in detail a commercial non-religious trip. The author visited the Caucasus, Persia, India and Crimea. However, the greater part of the narrative is dedicated to India: its political structure, trade, agriculture, customs and traditions. The writing is full of lyrical digressions and autobiographic passages.

The postal stamp provides images of the monument to Afanasy Nikitin in Tver, as well as Tver and India with ancient places of interest. 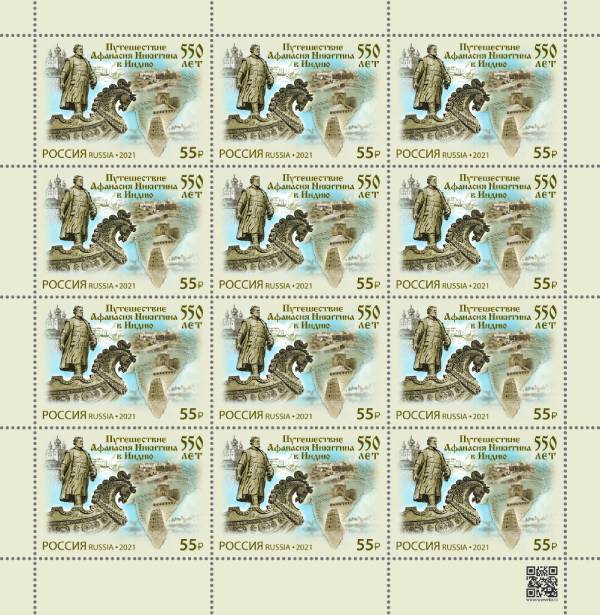 In addition to the issue of the postal stamp, JSC Marka will produce First Day Covers and special cancels for Moscow and Tver. 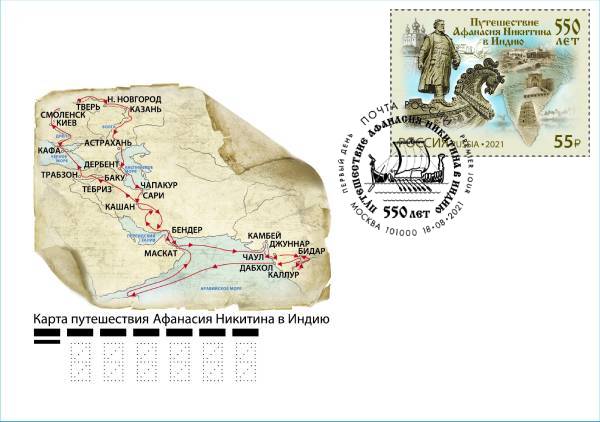 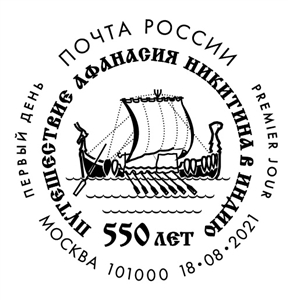 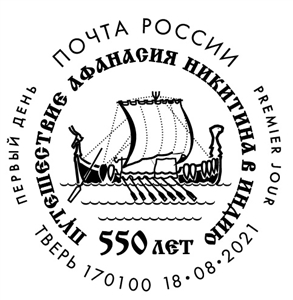