300 years of the Prosecutor's Office of Russia

On November 17, a postal block timed to the 300th Anniversary of the Russian Prosecutor's Office will go into postal circulation 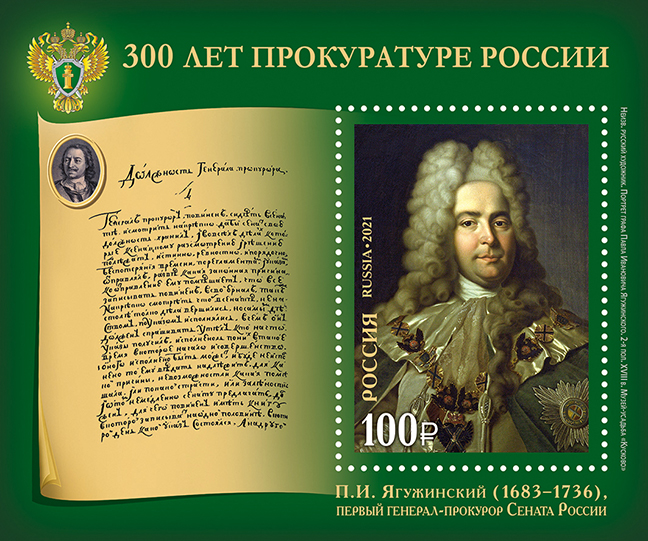 The Russian Prosecutor's Office was established on January 12, 1722, in accordance with the Edict of his Imperial Majesty of Peter the Great to the Directing Senate. The prosecutorial system of that time was headed by an Attorney General subordinate to the Emperor. The main purpose of the prosecutor's office was to supervise the observance of the law. The first person whom the Emperor appointed the Attorney General of the Senate was Count Pavel Yaguzhinsky.

Since 1802, the institution of the Public Prosecutor's Office became an integral part of a newly formed Ministry of Justice, and the Minister of Justice by virtue of his position became an Attorney General. In November 1917, the highest government authority in the country, the Council of People's Commissars, adopted No. 1 Decree on Courts, which abolished pre-revolutionary courts, institutions of court investigators, procurator’s supervision, as well as jury and private advocateship. Their functions undertook the newly instituted people's courts and revolutionary tribunals. Special investigation commissions were formed to conduct preliminary investigations.

In January 1992, after the breakup of the USSR, new Federal Law On the Prosecutor's Office of the Russian Federation was adopted. At present, the prosecutor's offices attach great importance to timely provision of information for representative and executive authorities of all levels on the state of lawfulness in established practice in applying the law.

The postage stamp provides a portrait of Count Pavel Yaguzhinsky (unknown Russian artist, 2nd half of the 18th century, Kuskovo Estate Museum); the margins of the postal block feature the emblem of the prosecutor's office, a portrait of Peter I, and the Instructions for the position of the Attorney General of the Senate, approved by Peter I (Russian State Historical Archive).

In addition to the issue of the postal block, JSC Marka will produce First Day Covers and special cancels for Moscow and St. Petersburg. 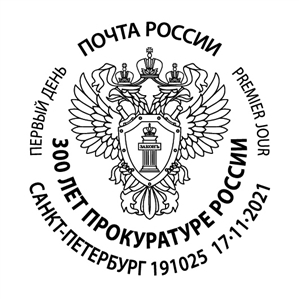 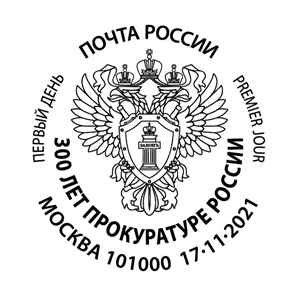