Souvenir Sheet: The Virgin of the Rocks, by Da Vinci (Saint Vincent and The Grenadines 1989)

The Virgin of the Rocks, by Da Vinci (Saint Vincent and The Grenadines 1989)

Also in the issue Christmas 1989 - Paintings of Italian Artists:

Souvenir Sheet The Virgin of the Rocks, by Da Vinci it reflects the thematic directions:

For more information about The Virgin of the Rocks, by Da Vinci, you can search for GOOGLE 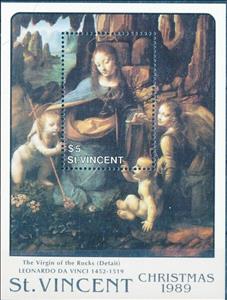