For more information about St. Bavo Receives Monastic Habit of Ghent, you can search for GOOGLE 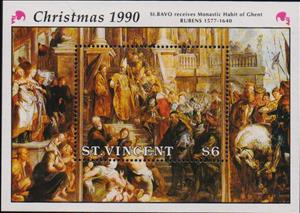