Mini Sheet: Various Butterflies from all over the World (Central African Republic 2020)

Various Butterflies from all over the World (Central African Republic 2020)

Mini Sheet Various Butterflies from all over the World it reflects the thematic directions:

For more information about Various Butterflies from all over the World, you can search for GOOGLE 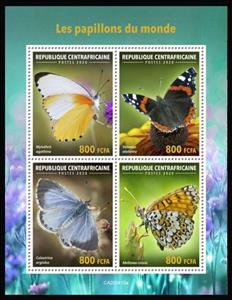