In St.James´s Palace (South Georgia and The South Sandwich Islands 2011)

Also in the issue Wedding of Prince William and Catherine Middleton:

Stamp In St.James´s Palace it reflects the thematic directions:

For more information about In St.James´s Palace, you can search for GOOGLE 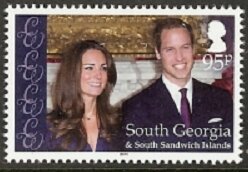