Ethnographic plots "Ancient Ukraine" Slobozhansky Chumaks on the road from Crimea. Five carts with a load, drawn by oxen, move past the mound with the "stone woman", accompanied by the Chumaks. Image of the Small Emblem of Ukraine (on the left upper corner). Face value: В = 10,000 Ukrainian karbovanets.

For more information about Chumaks (salt-traders), you can search for GOOGLE 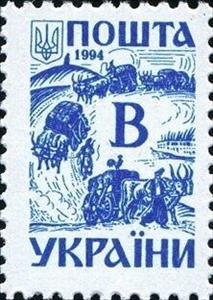