India Telegraph stamp overprinted "CEYLON." twice Telegraph stamps when used were bisected in half, with the top half being given to the sender of the telegraph as receipt for payment.

For more information about Queen Victoria, you can search for GOOGLE 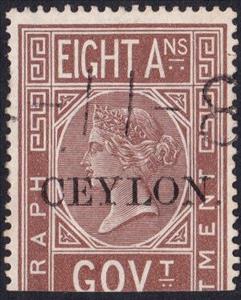