Since 1993, the sale of Christmas seals has been a financial support for Åland associations and organizations to realize many important and helpful projects. The self-adhesive Christmas seals may be used as decoration on Christmas greetings and presents.

Also in the issue Åland Islands:

For more information about Christmas Seals 1993, you can search for GOOGLE 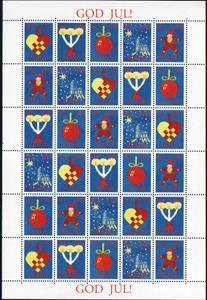