The Story of Martell Cognac - War and Peace (Jersey 1982)

Also in the issue Historical Links between Jersey and France:

Booklet Pane The Story of Martell Cognac - War and Peace it reflects the thematic directions:

For more information about The Story of Martell Cognac - War and Peace, you can search for GOOGLE 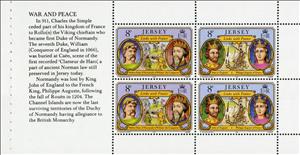