For more information about 50 Anniv Transport Museum Chelles; Versailles Tramway 1896, you can search for GOOGLE 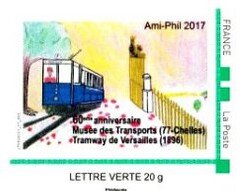