Stamp: King Michael Overprinted for Use by Prisoners of War (Romania 1946)

King Michael Overprinted for Use by Prisoners of War (Romania 1946)

Also in the issue Prisoner of War Franchise Stamps (1946):

Stamp King Michael Overprinted for Use by Prisoners of War it reflects the thematic directions:

For more information about King Michael Overprinted for Use by Prisoners of War, you can search for GOOGLE 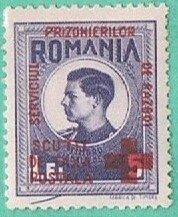