University Library and Equestrian Statue of King Carol I (Romania 2014)

Also in the issue 100th Anniversary of Carol I University Foundation Palace:

Mini Sheet University Library and Equestrian Statue of King Carol I it reflects the thematic directions:

For more information about University Library and Equestrian Statue of King Carol I, you can search for GOOGLE 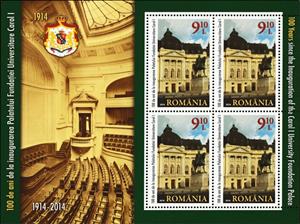