For more information about First Bishop Right Rev. Daniel G. DAvies, you can search for GOOGLE 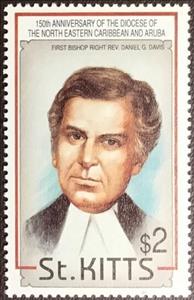