Mini Sheet H.M. The Queen Mother In Memoriam 1900-2002 it reflects the thematic directions:

For more information about H.M. The Queen Mother In Memoriam 1900-2002, you can search for GOOGLE 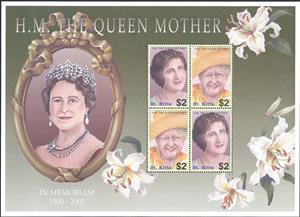