Stamp from souvenir sheet. "Poplars on the banks of the river Epte seen from the Marsh " detail in private colection.

Also in the issue 75th Death Anniversary of Claude-Oscar Monet,:

Stamp Painting by Monet it reflects the thematic directions:

For more information about Painting by Monet, you can search for GOOGLE 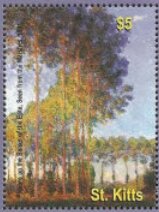