Mini Sheet: The Fifth Anniversary of the Passing of Princess Diana (Saint Kitts 2002)

Also in the issue 5th Death Anniversary of Diana, Princess of Wales:

Mini Sheet The Fifth Anniversary of the Passing of Princess Diana it reflects the thematic directions:

For more information about The Fifth Anniversary of the Passing of Princess Diana, you can search for GOOGLE 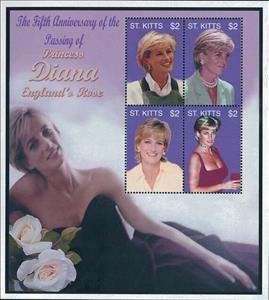