Stamp from souvenir sheet. Although this issue was authorized by the postal administration of Guinea, the issue was not placed on sale in Guinea, and was only distributed to the new issue trade by Guinea's philatelic agent.

Also in the issue 225th Anniversary of the Louvre Museum:

Stamp "The Lacemaker" (1670), by Johannes Vermeer it reflects the thematic directions:

For more information about "The Lacemaker" (1670), by Johannes Vermeer, you can search for GOOGLE 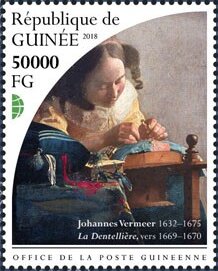