20c revenue stamp of 2003 surcharged "10¢" and obliterating block in black Issued for sales tax; might also exist postally used, but such use was never officially authorised. Mentioned but not listed by Sn. Revenue Reverend cat. no: R91

Stamp Coat of arms of Saint Vincent it reflects the thematic directions:

For more information about Coat of arms of Saint Vincent, you can search for GOOGLE 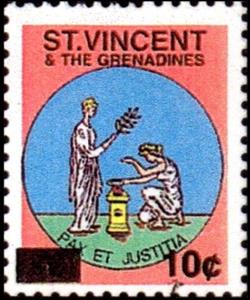