Also in the issue Personality:

Souvenir Sheet The 25th Ann. of the Death of Salvador Dali, 1904-1989 it reflects the thematic directions:

For more information about The 25th Ann. of the Death of Salvador Dali, 1904-1989, you can search for GOOGLE 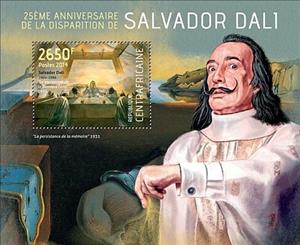