For more information about "Gloucester Harbour Sun" (1895), by Willard Metcalf, you can search for GOOGLE 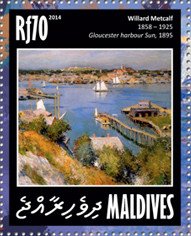