For more information about "the English Ship Hampton Court" (detail), by W. v.d. Velde, you can search for GOOGLE 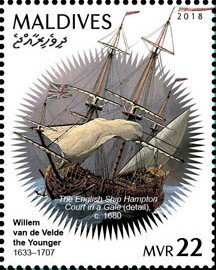