Mini Sheet: The 53rd Anniversary of the National Day (Kuwait 2014)

The 53rd Anniversary of the National Day (Kuwait 2014)

Mini Sheet The 53rd Anniversary of the National Day it reflects the thematic directions:

For more information about The 53rd Anniversary of the National Day, you can search for GOOGLE 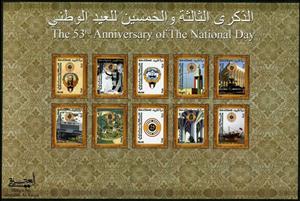