09 May (Barbados ) within release Visit of US President Clinton to Barbados, May 1997 goes into circulation Mini Sheet Pair, Barbados' and US' flags and arms face value 10 Barbadian dollar

Issued in sheets of 8 stamps + 2 labels

Also in the issue Visit of US President Clinton to Barbados, May 1997:

Mini Sheet Pair, Barbados' and US' flags and arms it reflects the thematic directions:

For more information about Pair, Barbados' and US' flags and arms, you can search for GOOGLE 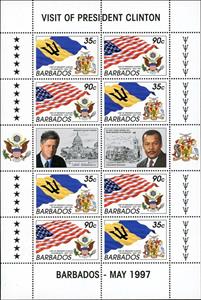